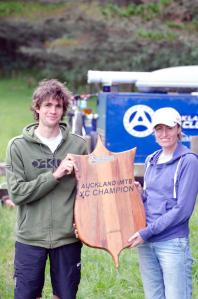 Here’s a write-up of the 2012 Endura MTB Series by the winner; 2012 Auckland XC Champion, Graham Norman:

The Auckland MTB club have been running the XC series for a while now in various forms. I’ve participated in various rounds through the years but never managed to string together the full series.  This year the stars aligned and the schedule was free of clashes. The first of the 3 round series was in the Woodhill forest. Most of my mountain biking is done in the “Sandpit” so is probably my most familiar trail base. The organisers managed to mix it up and create a course which surprised even the most seasoned Woodhill riders running a few of the trails backwards testing skills. The race went well for me, getting clear early on and riding by myself for the rest of the race.

The second round was in the Hunua forest. The Hunua XC circuit is a classic. Probably my favourite location for a lap based cross country race. The technical climbing, roots and river crossings  make it pretty challenging. In the past two years I’ve managed two second places at this race so was keen to give it another crack. On the day, things didn’t go quite to plan making too many mistakes on technical section. Nicholas Reeves capitalised on any mistakes going clear halfway through the race. Junior rider Sam Gaze made the whole field look like we were out for a Sunday stroll. Definitely one to watch over the upcoming season.

Round 3 took place at the Slater Road Farm. Slater Road is a hidden gem. The opportunity to ride these trails again made me doubly excited for the race. Going into the race I was sitting tied for first place with Nicholas Reeves in the  overall series. It was all on the line in the series finale. The race went well for me, getting put on the ropes for the first lap by Adrian, but managing to get away during the second lap. A bit of a downer to see Nicolas on the side of the track with food poisoning, so looking forward to another battle in the future. The win meant I took out the overall series.

Finally a big thanks to the volunteers from the club who did an amazing job organising these races, setting super fun courses and keeping them affordable.  Read more at http://www.grahamspartynorman.blogspot.com.au