Regular club riders will know Adriano Perazinni. He sent in this report of his experience on this year’s Motatapu race: 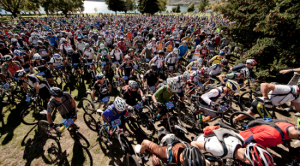 This is one of the most prestigious races in NZ and judging by the number of riders there must be a good reason for it.

So I and Paul decided to give it a go but we left it a bit late and it was fully subscribed, we had to wait for somebody to drop out, luckily this happened and we were able to enter.

This is a race like the T42 where you have to carry a survival kit with you and have a prerace bike check.

The event included a Xterra multisport, various runner events and the 47Km Mountain bike race. A good thing about it is that the mountain bikers start at the decent time of 11:30am, not early in the morning like most other races, so there is plenty of time to prepare.

Weather was sunny and warm, since we don’t like to carry a backpack we managed to stuff the survival kit in different places on the bike, it made look a bit funny but it worked.

There were different waves at the start since there were more than two thousand riders competing, we were on the elite so at the front, another six waves followed.

It starts on a grovel road for about 3kms, and being dry you had to swallow quite a bit of dust, after that goes to 4 wheel drive track on a gradual ascent with some sharp pinches for about 20Kms before flattening out a bit on grass and then descending sharply to Arrowtown.

All ok for the first 20Km and then, as in my previous two races, a mechanical. Rear gears started to slip randomly, felt like throwing the bike in a ditch and join the marathoners but had the wrong shoes.

Anyway, managed to continue swearing and cursing to the end.

The downhill section is quite enjoyable and reasonably technical, especially since you have to pass hundreds of runners trying not to knock the odd one, in the first part of the race you cross a few streams, nothing major, all ridable, but in the last two Kms you have to cross the Arrow river about ten times and you end up in waist deep water looking angrily at the local riders passing you that know the correct route around in shallow waters.

At the end great atmosphere with lots of people and quite a few stands, plenty of food and drink.

This is a race where you are never alone, there is always either a rider or a runner nearby, so it goes pretty quick, I took 2hr and 27min, pretty average for 47Kms, it’s not a hard race but I wouldn’t like to do it in bad weather, it could get quite cold and windy, we were lucky.

Definitely the race with the highest number of participants by far in NZ, maybe due to the fact that this year was the tenth anniversary. It must be done at least once, the scenery is spectacular and the organization excellent.