Looking over the Waikato from the Gum Ta Native track, Te Aroha

I’ve often driven along SH27, on my way to or from Auckland, and glancing across to Mount Te Aroha thought to myself that surely there must be some riding to be had in them thar hills. Turns out I was right.

The club made it’s annual pilgrimage to Te Aroha on April 23rd and was treated to a tour of the local MTB trails by local racing legend, trail-builder and all-round good bloke Geoff Buysman. 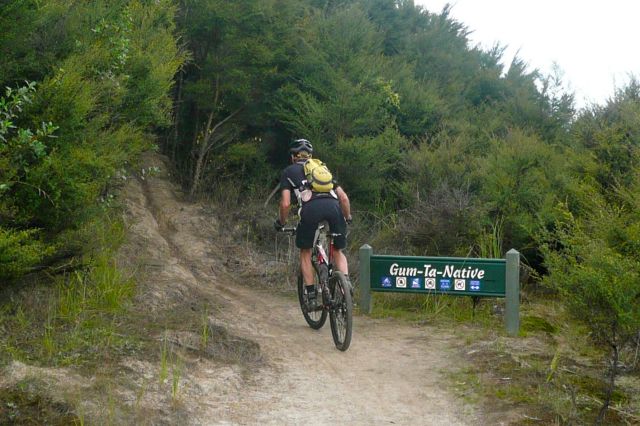 Geoff at the start of "Gum Ta Native"

We met up at the Domain, but rather than heading straight for the main MTB trails Geoff took us for a “warm-up” climb up a track he has been building single-handedly since 2006. Make no mistake, ‘Gum Ta Native’ is Geoff’s baby, and he has nurtured this stunning piece of singletrack with all the care and attention of a doting parent. The track is a very technical climb; steep, full of rocks, roots, switchbacks and elaborate bridges and boardwalks that skirt around the sheer rock faces that couldn’t be carved through. Impressive stuff.

The steep pinch climb at the track’s very beginning was an indicator of what was to come and Geoff’s assurance that it was all rideable “if you’re good enough” proved to be more warning than encouragement. Despite our best efforts, including trying some sections more than once, none of us were able to clean the whole thing. I suspect Geoff managed it, but can’t confirm that as we were so far behind that the only time we saw him was when he stopped to let us catch up.

It's all in the detail. Old tyres provide grip on the bridge.

The top of "Gum Ta Native"

The track is still a work in progress and after 3km and several hundred metres of climbing it comes to an abrupt halt, just as the gradient starts to ease up. The plan is to continue the track over the ridge and down into the next valley, eventually returning to the North end of the town. For now you have to point your bike back downhill and enjoy the track in the opposite direction. What’s most impressive about this track though is that with a little gravity-assistance it flows. Those granny-gear climbs that caught you out on the way up turn into swooping corners and before you know it you’re down, and ready to go again.

Or at least I was. But we had the rest of the trails to explore, and it was nearly lunchtime, so Geoff took us on a quick lap of the main trails before we stopped for a very pleasant, and leisurely (for by now the sun had come out – take that Metservice!) feed at the cafe in the domain.

Anna makes it across

With full bellies we very nearly called it a day there…  but the urge to ride won out and we decided to sample a few more local tracks, heading North through town before following an old 4WD track into the bush, through a few river crossings, then following a very nice walking track (mixed use) that took us back to the main tracks again for a second blast on some of our favorites from the morning’s riding (Rockhampton and One Man’s Work were stand-outs).

Here’s a suggestion: the next time you’re headed down to Rotorua or Taupo for a weekend’s riding, set off a couple of hours early, and stop in Te Aroha for a quick spin. You won’t be disappointed.