There has been so much written and said about this event I’m not sure I can offer anything new, other than to agree that it was a superb event and really showed off some of the best trails that Rotovegas has to offer.

We arrived Friday and stupidly I agreed to pre-ride the course with Hayden and Jeremy (only two of the fastest singlespeeders in Auckland!!) Anyway, it was really worth while to pre-ride some of the tricky sections and although tired afterwards, felt ready for the race. We met up later that evening, floated around at race briefing that no-one seemed to be listening to, tried to work out the cryptic clues for the start procedure, tried to figure out what the crazy dude on the stage had on his head and had a few beers.

I think it was twisted Smurf outfit of some kind

Race day arrived and we headed to the event village to set up the club EZ-Up and get in character….

Jeremy, his partner Kate and I set up a little Auckland MTB Club corner. It was great having the flags there and a club presence as no other club managed it. The shade was most welcome once the sun came out too. Club members started appearing, Tad and Aidan, Gladiator Hayden, Simon, Adriano, Brent, Clive and the club area was a hive of activity. Then it was time for the grand unveiling. Jeremy squeezed into his stunning pink and black skinsuit while I stripped down to reveal my outfit….. 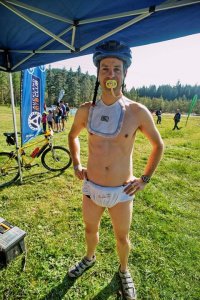 The race itself was soon upon us and there we were, nearly 1000 riders tying to ride around in a big slow circle while Dean, up on a cherry picker, was rambling away about something on the microphone and threatening to make us go round and round for ages.

Round round baby round round....

The course was superb, The first few kms were nearly all climbing, unless someone in front put their foot down and then you were walking. Bit the course included some classic sections – Be Rude Not To, Pig Track, Rock Drop and had nana routes and tougher routes, all linked together with fire roads for passing. The beer short cuts were great too and I supplied my own gluten free beer so I could join the fun. The tough 20km loop took its toll on me and I went backwards in lap two. Other club riders did very well; Jeremy sped ahead and finished in front of Mike May, Hayden and Tad were charging too while Adriano and Geoff Buysman were riding hard right up to the line.

Of course, there were no results save for the two important ones – 1st female was Aussie Heather Logie while 1st Male was New Zealand’s very own Garth Weinberg, beating full time pro riders on his own turf. A great result and a perfect way to round out the racing.

Heather showing off her winners tat 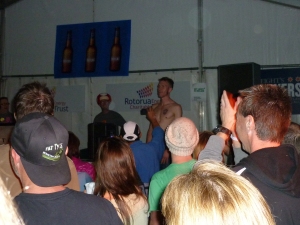 and Garth showing off his

Of course, racing was just the start of it and the drinking carried on well into the night. It was a cool party, lots of drinking and lots of bike banter – Tad, Hayden, Jeremy and I were pretty much the last to leave the big party tent! While there, we did manage to get up close and personal with the very lovely Heather Irmiger, the 2009 US National Champ an SSWC in 09. 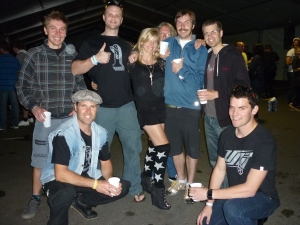 For photos and more stories check out www.sswc10nz.co.nz. Between us we took loads of photos and will get them up on Facebook soon.

Sunday, a group of us went out for a ‘quick spin’ whih turned into a 4 hour epic. We racked up over 120ks on the Singlespeeds over the three days (Fri-Sun) and some of you did more on Monday too! Good times, thanks everyone and thanks to the Organisers. I think our race series is a lot of work but the SSWC were massive. Awesome effort.

This entry was posted in Races. Bookmark the permalink.