It was my second go at the Day Night Thriller, with the first time being in 2007. The Auckland MTB Club had three teams including my team – the Aluminuim Allstars. Back in 2007 we got Silver medal – how would we fare this year? Tim had never done a solo race before – how would he go? And why was Anna so green??

With the mad August and all the club stuff going on we kind of got onto this a bit late. Despite this we managed to get three adjacent sites for the three club teams: The Aluminium Allstars (featuring yours truly, your favourite club president, Kurt Janssen and Damien Steel-Baker), Tim Farmer taking part in his first 12 hour solo (don’t mention the roof of the 6 x 3 gazebo that got left behind in his garage….) and The Great Team Who Mountainbike. A 12 hour Mixed team entered into the Open Cat. You may have seen Anna – she was the one in bright green tights, painted green and on a green bike. Grant Ogilvie and his partner Leanne also took part in the 6-hour event.

The day started with the crazy mass start, channelling a few hundred riders into a 4 metre wide chute that created a bit of carnage. 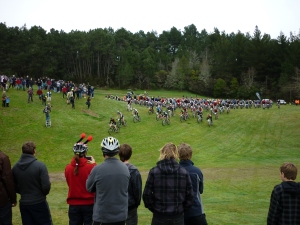 A bit like that scene from Jurassic Park, just a few less dino's and few more bikers...

Tim Farmer did not fare so well, braking to avoid a pile up in front of him he hit a tree stump with his chest. The bruising looked nasty and depite trying to battle through the pain, it put a real dampner on his day. X-rays on Sunday showed a fractured rib – well done for not giving up straight away and doing 8 laps after the accident! Hope it heals quickly.

We had a road bike there this year in the hope of helping with warm ups and cool downs, preventing ourselves from getting cold and siezed up, especially now we’re a bit older! It seemed to work although we probably looked far too serious!! 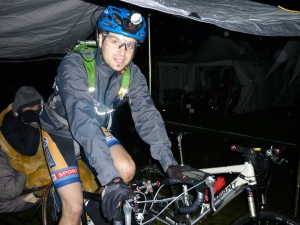 Warming up, contemplating a double-lap in the cold and rain.

Anna’s team did well. They were a good bunch with some quick guys pulling out some consistently quick laps. They did well and pulled out 35th overall and 13th in their category. Must have been those green tights that really made the difference!

Wile I was out on my final double lap, Grant came along and got some food going on the BBQ. He did a tremendous job considering I had not brought along the BBQ utensils and gave him just a fork to work with! 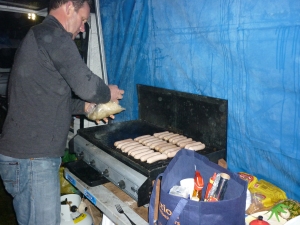 Grant Ramsey - you expect me to f-ing cook all this f-ing food with just an f-ing fork??? He did not say that but he might have thought it.....

With me being as sick as a dog and kurt having had no sleep for a week or so while his whole world literally shook (he lives in Chch now) the Aluminium Allstars were not too hopeful of a good performance. However, after a few hours and some respectable lap times, the first results put is in fourth. Looks were exchanged and words were not needed – we were in with a podium shot. So we dug in and the for the next four hours or so we hovered in 3rd until with about 3 hours remaining the updated placings put us two seconds behind the second placed team. 2 little seconds. We could not believe it. I chugged down more drugs and we pushed as hard as we could. Damien kept his lap times superbly consistent while Kurt and I slipped a little. 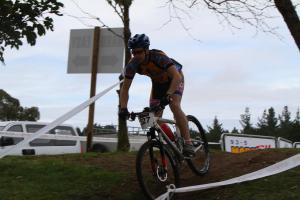 Marke - I was only on the brakes as there was someone slow infront of me, honest....

My last two laps were tough. I’d pretty much had it by them. I’d had more than the permitted dose of cough medicine and nurofen and just had to grit my teeth – every pedal stroke was a challenge and all I could think was that this could be the difference between bronze and silver. Damien wrapped up the race with a quick lap and we headed to prize giving not exactly sure of our fate.

The result…..Silver medal! For the second time in as many attempts the three of us, all riding Giant Anthems, got onto the podium! We were stoked, so stoked in fact that we never got anyone to take a picture of us with our medals! Bugger.

Still it was a superb day, well run and the rain and slippery conditions at the end could not ruin the excellent event. Thanks to Murray and the guys at Event Promotions for their hard work and we’re already looking forward to next year. Time for a gold medal I reckon 🙂

This entry was posted in Races. Bookmark the permalink.